As smart and aware consumers we know all about food labelling and its importance in today’s times. As defined by Food and Agricultural Organisation of the United Nations (FAO), “includes any written, printed or graphic matter that is present on the label 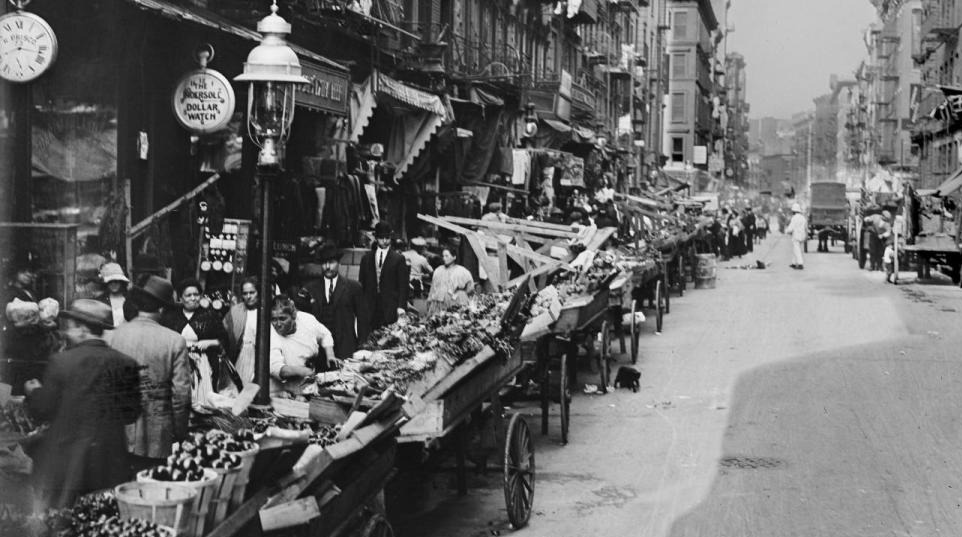 As of today’s smart and aware consumers that we are, we all know about food labelling and its importance in today’s times. Food Labelling as defined by the Food and Agricultural Organisation of the United Nations (FAO), “includes any written, printed or graphic matter that is present on the label, accompanies the food, or is displayed near the food, including that for the purpose of promoting its sale or disposal.”

In earlier times, food labelling was not present nor required as the food was produced and consumed locally. Also, there was no need for processed or packaged foods as against today and therefore, food labelling and regulations governing them came in much later. 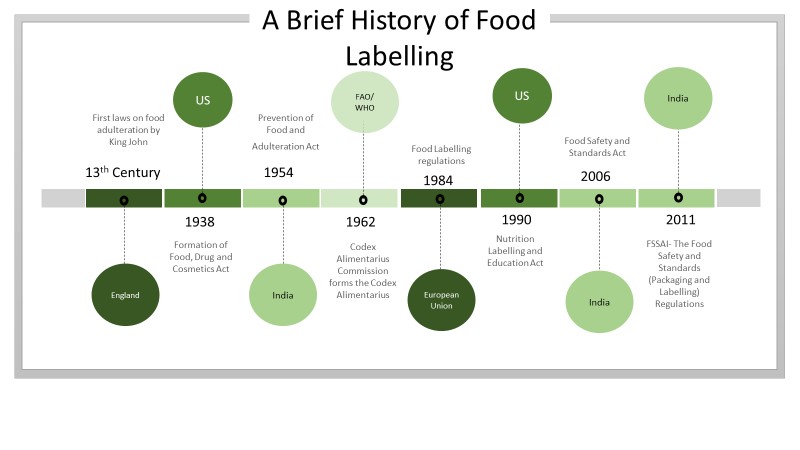 The earliest record of food regulations can be traced back to the 13th century when King John of England enacted the ‘Assize of Bread’, which regulated the price of bread sold. Later in the 14th and 15th centuries, bread, wine and butter also were regulated which required these items to have a ‘mark of the manufacturer’ to prevent them from adulteration. Food Labelling actually began with these marks on food products and later in the 19th century with the era of Industrialization, consumers became more reliant on food labels as sources of information on quality and safety. This led to various countries establishing their own food labelling laws.

Although European countries seemed ahead of the US in enacting food adulteration laws, however, it was the US that first brought out food labelling laws robustly, including the importance of stating nutritional information on labels. The US food laws system started with President Lincoln launching the Department of Agriculture (USDA) and Bureau of chemistry (FDA). Then there were many efforts that came in after that.

This long history of Food laws in the US is the very reason for a very comprehensive and extensive labelling requirement that’s present now, which is nothing like that of other countries. Later in 2016, the FDA brought in a new set of rules and revised its nutrition panel as it realised the importance of nutrition labelling and the needs of consumers.

European countries did have provisions in place for food adulteration practices and misbranding however its nutrition labelling regulations came in almost a decade after the US. The European countries were concerned about the economic state of their farmers and manufacturers and therefore realised the importance of nutrition labelling much later. Therefore, the Food labelling system began only in the second half of the 20th century. 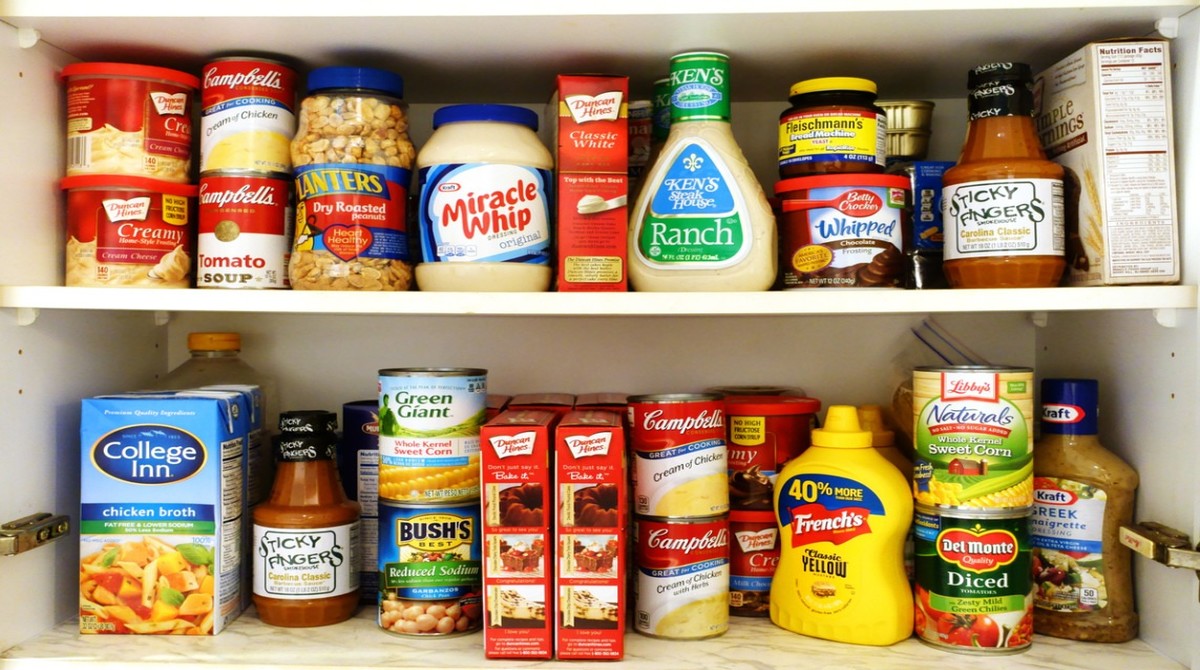 The Indian food regulatory system started in 1954 with, Prevention of Food and Adulteration Act. This Act gave minimum guidelines on writing the name of the food, the name of the manufacturer, the batch or code number, the net weight, etc. Following this Act, various other acts like the Fruit products Order, Meat Food products order, etc were enacted. Other horizontal bodies like the Bureau of Indian Standards (then ISI) and Agmark also came up, that governed only certain categories of food products and gave their own standards. However, it was only after the Food Safety and Standards Act, 2006 that brought about a revolution in the food regulatory system of India. This Act replaced all the previous food related Acts. Under this Act, the Food Safety and Standards Authority of India (FSSAI) was launched in 2011 and became the apex food regulatory body of India. FSSAI was implemented under the Ministry of Health & Family Welfare, Government of India. This regulatory Body gave various mandatory regulations including ‘The Food Safety and Standards (Packaging and Labelling) Regulations, 2011’. This Standard consisted of various guidelines related to packaging and labelling of food products in a much more extensive and explanatory way. Some of the Labelling requirements under this standard is listed below:

The Nutrition Labelling of packaged foods in India is currently governed by this regulation and all manufacturers need to have these twelve compulsory details listed on their labels. However, having said that the Indian Food Labelling system is extensive, it is still emerging and growing. The reason is because of the fact that currently new guidelines related to mandatory enforcement of colour codes for high sugar, high fat and high sodium products on labels; Front of Pack (FOP) Labelling, etc is still under scrutiny.

As different food laws and standards started developing in various countries, there emerged a problem of Food Trade. This led to the realisation of the need to establish a common framework for food laws across. After the FAO (1945) and World Health Organization (1948) were formed, a number of joint experts meetings were held. These meetings brought about the importance of nutrition, the use of additives and issues of contradictory food laws in countries that are hampering the trade globally. Later in 1961, after a number of these meetings and conferences, the FAO in its 11th conference passed a resolution to establish the Codex Alimentarius Commission. Then in 1962, the Codex Alimentarius Commission started its work to create the Codex Alimentarius (Food Code) that we know of today. As of today, the Codex Alimentarius has 188 member countries and various laws on labelling including nutrition labelling in specific. Its main role is to facilitate fair trade practices by giving internationally recognised standards and guidelines that usually form the basis for each country-specific standard.

Looking at the brief history of the Food Labelling System globally, we can say that all countries have come a long way ahead. From England enacting its first food regulations to the US establishing a comprehensive nutrition panel early on, all countries now have a proper system of governing packaged foods. The basis of ‘Local production and consumption has long gone and now it's ‘Global production and consumption. The need for packaged food items has increased at such great heights, that one would not be wrong in saying that there is still a LONG WAY AHEAD in this journey of labelling. 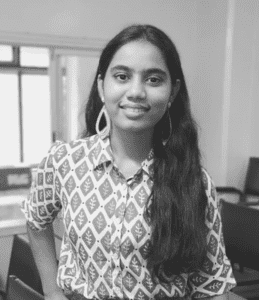